Cash Blox is a retro-style arcade game that has been re-designed to function as a video slots machine. It has been designed by Playtech. In essence, the game is similar to classic arcade games like Tetris, and is based on the premise of completing as many full lines as possible, formed by the blocks that fall into the gaming area from the top of the screen.

Setting up game play for Cash Blox is relatively easy, and players will simple need to click on the bet plus and bet minus signs to adjust the value of their bet, which may be anything from 0.50 to 50, making this game attractive to all types of players, regardless of whether they are novice players with a low budget or high rollers. The bet placed will be visible in the right-hand corner of the screen.

Payouts in Cash Blox occur when players manage to complete one or more full lines with the randomly-shaped blocks that fall down from the top of the screen. Payout values differ depending on how many lines are formed, and players can be paid out singles, doubles, triples, or quadruples, simply referred to as quads. As soon as a completed line has been formed, the cell in the lowest row of the given column with the payout will be highlighted. Subsequent wins of the same number of full lines will highlight the cell in the row above on the same column, and so forth. Once a completed line has been formed, that respective line will disappear, and the blocks from the top will fall into their place, which gives players the chance to form even more full lines.

Once a block cannot fit into the grid, that is, players have come to the top of the screen without being able to complete any more lines, the game play will end. All the payouts of the game are then added and the total win shown in the lower right-hand area of the screen. 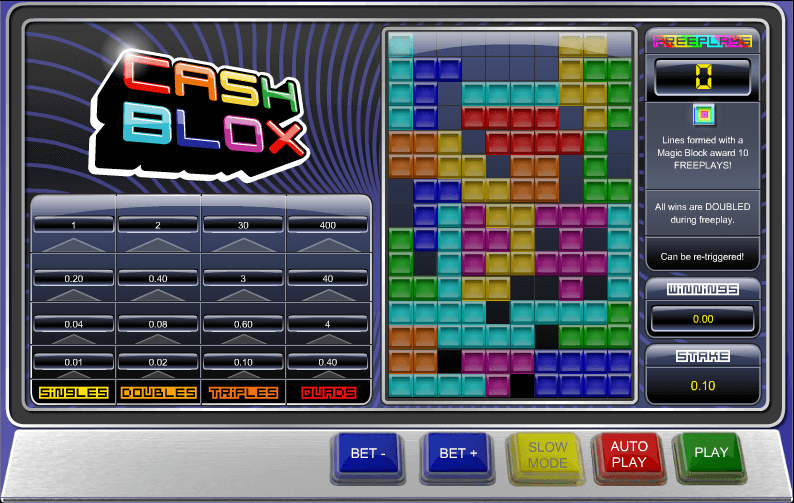 If players manage to complete a full line and that line or set of lines includes a multi-coloured block, which is known as the game’s Magic Block, then this will trigger the free falls round of the Cash Blox game. These operate similarly as free spins, and players are rewarded with ten free https://onlinemobileslots.net/mastercard/ plays that are played out at the same bet as the round that first triggered the free plays.

There is no difference in the actual game play between the base game and the free games, and players will simply need to continue forming complete lines. All free plays are played out automatically once triggered, and can be re-triggered by forming another complete line containing a multi-coloured Magic Block.