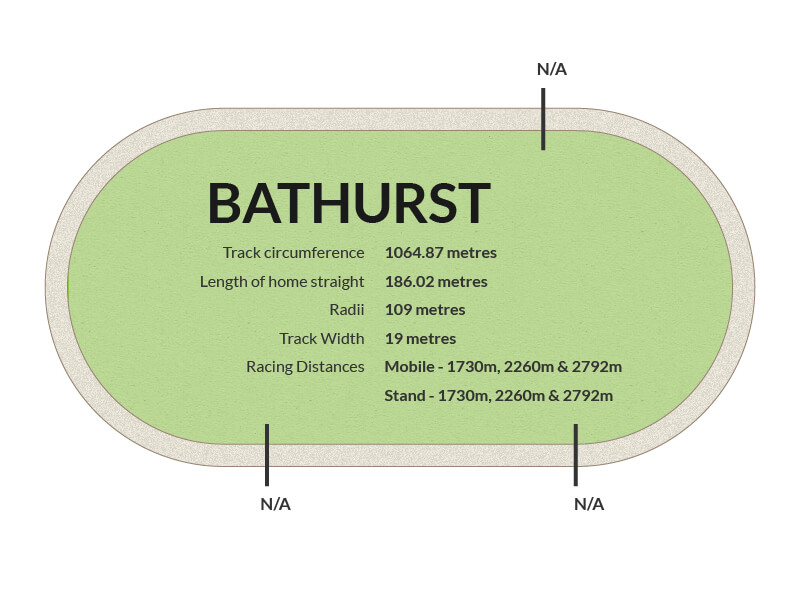 Bathurst harness track is a racecourse in Bathurst, New South Wales in Australia. The original track was on the old Bathurst show grounds, but was rebuilt in 2014.

The track is 1064 meters long featuring a home straight of 186 meters. All harness tracks are oval shaped, but have differing circumferences and surfaces. Bathurst is noted for its crushed granite surface.

Bathurst hosts races every Wednesday and Friday night. The primary races are held on Friday nights and attract a decent local crowd. Night racing in Bathurst is a social gathering, with many young adults and couples considering it a night out. There are a number of bookmakers on site on both Wednesdays and Friday nights in order for punters to place bets on their favourite horses. Many of the races are covered by TAB, although not the smaller trials during the week.

Friday nights at Bathurst are a social occasion, with onsite bars and restaurants. The bars all offer in house betting as well as SKY coverage of other races. Betting on the other races can be done via the onsite bookies at Bathurst.

Once a year Bathurst racetrack holds its Gold Crown event, which is a racing carnival over nine days.  The Gold Crown is held annually in late March. It is known as the richest country harness racing carnival in Australia, attracting national horses as well as local ones. This means that the field is quite large, giving punters a varied choice to bet on.

The final race of the Gold Crown is held on the last Saturday and has a purse of $100 000. The race is for two year olds, historically being the start of many a very good horse’s career. It is a good race for punters to watch to analyse future potential of horses in the sport and knowledge can be used in horse racing betting.

Tracks like Bathurst, despite hosting national cup carnivals, usually have local horses or trainers or even families who win most of the races. Local horses and trainers know the track, as well as the other competitors and punters. If you are planning on betting on a race at a track such as Bathurst it is worth doing some research to see which horses or trainers have historically had success at the track. Many families have trainers, drivers and even junior drivers in the family business, which would be harness racing.

Placing a bet on a race at Bathurst can be done at the track in a social atmosphere, which is where many of the locals gather to do just that. Onsite bookies offer odds and a personal touch, as the track is small socially. Not all the bookies sit behind the windows, and many can be found in a social environment

Placing a bet on a race at Bathurst can also be done online via a number of sites. Most of the sites will be based in Australia, very few international sites will cover racing at Bathurst. These sites will also only cover the major races when they are on, the local Friday night or mid week races will have to be wagered on at the actual track.