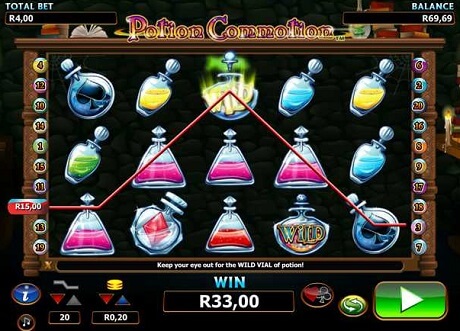 Potion Commotion is an online slot game powered by NextGen casino software. This game features 5 reels and up to 20 paylines in a standard slot game format that has been brought to life by a unique alchemy theme that NextGen has used to design their game to resemble the dark and intriguing workshop of a skilled potion-maker.

The theme of Potion Commotion is evident in the game’s design, which has been created to resemble a workshop filled with different potions and other alchemy-related items. The backdrop of the game features dusty shelves that are filled with books, dim lights, potion bottles, mixing beakers and candles, which give an unkempt and mysterious feel to the game. The pay table has been designed to resemble a carved wooden shelf on which the potion bottle reel symbols are sitting.

The brightly coloured potions stored in sparkling bottles also add an element of excitement and suspense to the game’s graphics.

The basic reel symbols in Potion Commotion are the various brightly-hued potion bottles, with the higher-paying symbols being the card suits of hearts, diamonds, clubs and spades, each encased in a different coloured potion. The other potion bottle reel symbols contain red, orange, pink, blue, green and yellow potions.

The potion bottle labelled ‘Wild’ is Potion Commotion’s wild symbol. This symbol substitutes all other game symbols except for the scatter symbol, helping to create more winning combinations during the game.

Any prizes won during the free spins bonus feature will be tripled, as Potion Commotion features a win multiplier that comes into play during the bonus game.

The free spins feature can also be retriggered if 3 or more scatter symbols appear on the reels during the bonus game.

Potion Commotion includes a gamble feature during which players can double or quadruple their previous win’s value. Players must accurately guess the colour of a hidden card to double their previous bet, or pick the correct suit of the card to quadruple it. Like features in many slots at sites selected online, this feature has a limit of up to 5 correct guesses.