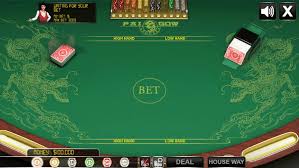 For Apple-dedicated casino games enthusiasts who enjoy the complexities of pai gow poker, iPad pai gow poker is a natural fit. Both iPhones and iPads connect their users to endless gaming options at mobile casino sites, and games coded to play on one will play on the other. The iPad’s large touchscreen is ideal when players are separating the seven cards dealt into two pai gow hands, and it delivers the beautiful graphics and animations of the best pai gow poker sites faithfully.

iPad pai gow poker also gives players the choice between instant no-download games played directly via the browser, and downloadable pai gow poker apps. Some apps are free, and deliver free play only, some apps carry a download fee but offer permanent free games thereafter, and others will be free to download, but then offer the player the option of opening a casino account to play for real money, or permanent free play if they prefer it. So players have access to both forms of play wherever and whenever they like.

iPad pai gow poker is based on an ancient Chinese game of pai gow, which uses tiles similar to those found in mahjong. Casino entrepreneurs Fred Wolf and Sam Torosian invented the card version, pai gow poker, in the 1980s. It is played with a standard 52-card deck, plus one Joker that acts as a Wild card.

The original table game features up to six players, with a dealer position that passes clockwise from player to player on each successive hand. The house has no stake in the game, and makes its cut by taking a commission from each winning pot. Most modern iPad pai gow poker options are much simpler: the player plays a hand against the house only, winning even money on the bet if they beat both the dealer’s hands.

After the player has placed a bet and hit the deal button, iPad pai gow poker deals player and dealer seven cards each. The player must then arrange their cards into two hands, a five-card hand and a two-card hand, that contain the best online poker combinations possible. The five-card hand must be of higher value than the two-card hand.

Both Hands Need to Win