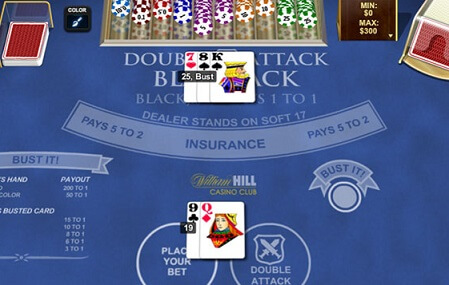 Table games are a very large part of casino gaming and consist of many of the more popular games associated with the industry. The game quite literally on the cards today is Double Attack Blackjack which as the name suggests is a variation of the popular game involving dealer and a race to 21. Being based so securely on a game as solid as Blackjack, this variation commands a certain level attention off the bat, suggesting a quality setup from the outset. There are a couple of unique aspects to this particular variant however, which involves additional wagers and odds, making it a possible candidate should players want to mix up their usual table game experiences.

Popular table games, especially card based ones, have a habit for spawning many different variations, based in some regard on the original. To the layman this can appear rather confusing, sets of rather similar games with slightly differentiating rules and regulations, however once players begin playing the different variants available they will quickly find that for the most part a good variation of a game essentially creates an entirely new one, with new possibilities and experiences to be had. This is ultimately the case with Double Attack Blackjack, offering players a unique spin on an original.

Since it is effectively a different game from the original it may be prudent to start the explanation from the beginning. The setup of Double Attack Blackjack comprises around 6 to 8 decks of 48 card Spanish decks. The game is played against a dealer and also like its predecessor the objective is to get as close as possible to 21 points, without going over, or going bust. Before any cards can be dealt the players are expected to make an initial bet. Once this bet is made the cards are dealt, 2 face down to the player and 2 to the dealer, one face-up and the other face down. Unlike the original card game however players can make an additional bet at this stage, basing it largely off the dealer’s face up card.

The game then plays out, with the players being able to hit, hold and even split the same way as in the original game. If the player beats the dealer they double their initial wager, whilst a Blackjack, an Ace and a face card, returns even money in this variation. There is however a bonus bet that player can make on whether the dealer goes bust on their third card, a bet that pays out based on the resultant third card that busts the dealer should the event arise.

Double Attack Blackjack has also got a few unique rulings that may be necessary to keep in mind but at the same time may be intuitively learned whilst playing the game. These include the likes of the fact that players can double down on splits, all the cards sans that of the Ace can be split up to 4 times and players even have the option to double or surrender at any time during the game. Overall this unique card variation doesn’t change much from the original, whilst still adding a few new options and experiences.