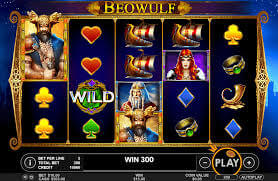 Quickspin’s Beowulf goes to show that not even ancient Anglo-Saxon epic poems have escaped the attention of online slots developers. A video slot with five reels and 25 paylines, it also comes with a number of special features to enhance what happens on the reels.

There are a number of special symbols in the game, including Wilds and Scatters, and there are free spins and a Grendel Attack feature as well.

The game uses rich graphics and animations, as well as a sweeping soundtrack, to tell the tale of a hero who makes his way into Scandinavia’s darkest regions to vanquish the monster Grendel and his dragon mother.

Despite the fact that Beowulf contains a number of bonus features, its basic gameplay is the same as the majority of online slots in Canada.

At the start of the game, after the introductory sequence, the relevant interface controls would be used to determine the value of the coins, the number of coins to be bet per line, and the number of paylines to be played per spin.

Those factors determined, the Spin button would be selected to make the reels spin. If symbols appear from left to right in consecutive order, according to the paytable, those combinations will pay out.

Apart from the nine, 10, Jack, Queen, King, and Ace lower value symbols, the rest of the online slot’s reel symbols are themed. They feature a mix of characters and items from the story.

There’s big, buff Beowulf himself, wearing little more than breeches and a cloak, women wearing wolf skins, King Hrodgar, a princess, a Viking warrior, Grendel, and Grendel’s dragon mom. Other symbols include a sword and a horn.

The title character, the sword, and the horn can all act as Wild symbols, while the dragon acts as a Scatter symbol. The horn can pay out as much as 500 coins, and it can substitute itself for other reel symbols to help create combinations that pay out.

When the sky behind the Beowulf online slot reels turns an ominous red, the Grendel Attack feature is about to start. When this happens, the fifth reel will spin, and Grendel will appear.

The hero will then fight the monster for a number of re-spins. Once vanquished, locked Wilds appear on the reels, which stay in place until all the re-spins have been played. As a locked Wild, the Beowulf symbol stays in place to substitute itself for other symbols.

The reels will return to normal once the re-spins have been played.

More epic drama unfolds when three or more dragon Scatters appear anywhere on the Beowulf online slot reels. The Scatter triggers the free spins round, but not only that; it also announces the arrival of Grendel’s dragon mother to fight the scantily-clad hero.

If Beowulf manages to kill the dragon, player receive an additional free spins. During the free spins game, sword Wild symbols will appear and stay on the reels until a dragon symbol appears and removes them, or until the free spins are played through.